Paschal Full Moon - A Supermoon and the First Full Moon of Spring!


But what about those, not aware or raised or redeemed by the Blood of the Lamb in this life all over the world, are they damned, doomed, no chance.


Of course not.
As examples of spiritual connection points ala Yeshua and the Great Covenant and Sacrifice, we are expected to follow His example. He observed the Passover and Festivals and instructed us to do the same on into the future. Because you are the lights Dad works through, to lead those who do not. By example.

Dad's people, found in the Book of Life, are in every religion, race, culture, etc. They instinctually follow his Holy ways, even though they have never seen a bible, nor were raised or instructed upon its precepts. You can see it in their eyes, radiance, expression of soul. Rest assured, at some point in the past, they accepted Yeshua as their Savior. In many cases, in many lives.

Now the militant types who dogmatically believe that you have to be baptized, saved, and on and on or YOU ARE GOING STRAIGHT TO HELL FOREVER AND EVER. These also ignore the over 400 places in the Bible that tell us we have been here many times, a half dozen declarative statements by Yeshua himself that this is so. But no, they follow seminary school dogma and that's that for them. They found one tiny sentence, that had nothing to do with having a life after life.

Hundreds of doctors have observed reported in tens of thousands of patients over a hundred years, as they revealed; these same patients having near death experiences or the like. These people - and I am one of them - have clear distinct memories of having lived before. And how we died before.

38 John said to him, “Teacher, we saw someone casting out demons in your name,[c] and we tried to stop him, because he was not following us.” 39 But Yeshua said, “Do not stop him, for no one who does a mighty work in my name will be able soon afterward to speak evil of me. 40 For the one who is not against us is for us. 41 For truly, I say to you, whoever gives you a cup of water to drink because you belong to HaMashiach will by no means lose his reward.

As you can see in the above passage, here was a person living and being as a good soul, doing good things in the service of the Most High, but who also, knew nothing of Yeshua's teachings, His covenants, nothing...yet he HAS AND WILL RECEIVE HIS REWARD. Yeshua makes it very clear here that there is a soul who is saved, not by works, but by redemption obvious in his nature. This verse flies right over the heads of millions and for thousands of years.

The Holy Book does not say these dogmatic things, that restrict, inhibit, and are Lucifer's doctrine. It says, far into the future, when this world is done, there is judgement day and those who consistently followed the darkness of their father (Lucifer) and chose not to accept offering of redemption of Yeshua and his sacrifice, are to follow Satan into the nether regions to atone for the thousands of years of evil they brought to His holy creation, our world. Let's face it, the church systems of this world are almost under complete control of the Dark Side.


April’s full Moon rises on the night of Tuesday, April 7. Traditionally called the Pink Moon, this full Moon will also be a spectacular super moon! As usual, when it matters, Dad loads up the sign during the season, with so many aspects it's kind of like being beat over the head. Hey! You! Pay attention!

Venture outside on the morning/night of Tuesday, April 7, to catch a glimpse of April’s full Pink Moon. This full Moon—which is a super moon, the first full Moon of spring, and the Paschal Full Moon—will be visible after sunset and reach peak illumination at 10:35 P.M. EDT.

For the best view of this lovely spring Moon, find an open area and watch as the Moon rises just above the horizon, at which point it will appear its biggest and take on a golden hue! (Find local Moon rise and set times here.)

Super Pink Moon: The Biggest and Brightest Super moon of the Year

We’re currently in the midst of a series of super moons, with the first having occurred on March 9 and the last occurring on May 7. That makes April’s full Moon the second super moon in this series, but certainly not the one to miss.

Thanks to the fact that April’s full Moon will be closer to Earth than either other super moon in the series, it will be the biggest and brightest full Moon of 2020!
How big and how bright, exactly? On average, super moons are about 7% bigger and about 15% brighter than a typical full Moon. However, unless you were to see a regular full Moon and a super moon side by side in the sky, the difference is very difficult to notice. Learn more about super moons here!

These conscious alignments synchronize you to our Holy Father's timetable. That's why Christian mystics make such a thing about these times and dates, seasons and signs. It synchronizes our consciousness and soul, with Yeshua/YHVH's magnificent design. We are on the same page, as they say. In the levitecal aspects of the Holy Book, we are well advised to pay strict attention to all this. His feasts and festivals are simple and easy to understand and follow, when you really understand them. It's more about a frame of mind, a linking of your heart and His, and finally, the MEANING of what the Festival is all about.

These are silken bonds, meant to keep us free, rather than enslave us to some endless pile of Talmudic/satanic rites and rituals that make no sense and just defy common sense. I always find that once I get aligned, He does the rest. The moment of breaking the bread, giving my easy love which is given anyways, and then it's done. From then on, His Festival he keeps flowing through me, with no effort on my part. He reminds, reveals, empowers, and gives.

Jeremiah 4:31 “For I have heard a voice as of a woman in labor, The anguish as of her who brings forth her first child, The voice of the daughter of Zion bewailing herself; She spreads her hands, saying, ‘Woe is me now, for my soul is weary Because of murderers!’

John 16:21-22 A woman, when she is in labor, has sorrow because her hour has come; but as soon as she has given birth to the child, she no longer remembers the anguish, for joy that a human being has been born into the world. Therefore you now have sorrow; but I will see you again and your heart will rejoice, and your joy no one will take from you.

Rev 12:5-10 She bore a male Child who was to rule all nations with a rod of iron. And her Child was caught up to God and His throne. Then the woman fled into the wilderness, where she has a place prepared by God, that they should feed her there one thousand two hundred and sixty days. And war broke out in heaven: Michael and his angels fought with the dragon; and the dragon and his angels fought, but they did not prevail, nor was a place found for them in heaven any longer. So the great dragon was cast out, that serpent of old, called the Devil and Satan, who deceives the whole world; he was cast to the earth, and his angels were cast out with him. Then I heard a loud voice saying in heaven, “Now salvation, and strength, and the kingdom of our God, and the power of His Christ have come, for the accuser of our brethren, who accused them before our God day and night, has been cast down.

Rev 20:1-2 Then I saw an angel coming down from heaven, having the key to the bottomless pit and a great chain in his hand. He laid hold of the dragon, that serpent of old, who is the Devil and Satan, and bound him for a thousand years;

“. . . And the Lord said unto Michael: Go, bind Semjaza and his associates who have united themselves with women so as to have defiled themselves with them in all their uncleanness. And when their sons have slain one another, and they have seen the destruction of their beloved ones, bind them fast for seventy generations in the valleys of the earth, till the day of their judgement and of their consummation, till the judgement that is for ever and ever is consummated. In those days they shall be led off to the abyss of fire: and to the torment and the prison in which they shall be confined for ever. And whosoever shall be condemned and destroyed will from thenceforth be bound together with them to the end of all generations. And destroy all the spirits of the reprobate and the children of the Watchers, because they have wronged mankind. Destroy all wrong from the face of the earth and let every evil work come to an end: and let the plant of righteousness and truth appear: and it shall prove a blessing; the works of righteousness and truth shall be planted in truth and joy for evermore.” ~ Enoch 10:11-16 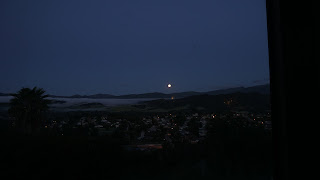 Posted by Juicing and Raw Foods Sunboy at 7:15 AM