Posted by Juicing and Raw Foods Sunboy at 11:24 PM
Email ThisBlogThis!Share to TwitterShare to FacebookShare to Pinterest

This is the MOST AMAZING TRUTH! (R$E)

Posted by Juicing and Raw Foods Sunboy at 10:56 PM
Email ThisBlogThis!Share to TwitterShare to FacebookShare to Pinterest

What Romans said about crucifixion

Posted by Juicing and Raw Foods Sunboy at 8:42 AM
Email ThisBlogThis!Share to TwitterShare to FacebookShare to Pinterest

Posted by Juicing and Raw Foods Sunboy at 8:34 AM
Email ThisBlogThis!Share to TwitterShare to FacebookShare to Pinterest

Posted by Juicing and Raw Foods Sunboy at 7:56 AM
Email ThisBlogThis!Share to TwitterShare to FacebookShare to Pinterest
Labels: Historic Letter written by Pontius Pilate to Tiberius Caesar

Are You Believing A Lie?

Posted by Juicing and Raw Foods Sunboy at 12:05 PM
Email ThisBlogThis!Share to TwitterShare to FacebookShare to Pinterest

Posted by Juicing and Raw Foods Sunboy at 11:32 AM
Email ThisBlogThis!Share to TwitterShare to FacebookShare to Pinterest
Labels: Gadrael, Who is Lucifer?

The Prophetic Protocols of Q (5/5)

Posted by Juicing and Raw Foods Sunboy at 11:05 AM
Email ThisBlogThis!Share to TwitterShare to FacebookShare to Pinterest
Labels: Prophetic Protocols of Q

How the CIA Broke America - Satanism in intelligence agencies

- sat
Posted by Juicing and Raw Foods Sunboy at 1:57 PM
Email ThisBlogThis!Share to TwitterShare to FacebookShare to Pinterest
Labels: Satanism in intelligence agencies

FBI set up and framed Trump advisor in 2017

“one of the FBI agents said to him, ‘this is what happens when you work for Donald Trump.'”

The FBI is a tool for the satanic network, as is the CIA.

But what about the FBI lying to us? Aren't there consequences for that? It's a felony for citizens, but as all this Trump setup stuff (3, now 4 KNOWN operations to frame him and his people) and lying to congress, and the DOJ, and the President, and the American people...why do these lying shitbags get a pass?

While the Chief FBI Counsel says on National TV that there was no spying......why aren't these liars being arrested for lying to EVERYBODY???

It's called "Obamunism:  Weaponizing the government to attack DemonRats' political opponents."  That's it, pure and simple.

They couldn't charge him with bringing money into the US, since he left the money in Athens.  That would not have been much of a charge anyway.  Not declaring EXACTLY $10K is a slap on the wrist sort of charge.  They were hoping they could use it for parallel construction of how they  found out about the crime he supposedly committed, which he didn't commit.  "We found him sneaking into the country with undeclared $10K, and so we started investigating him", sort of deal. The whole thing was a setup to justify yet another op to go after Trump's team and POTUS. That's the kind of intelligence agencies we have in AMERIKA. 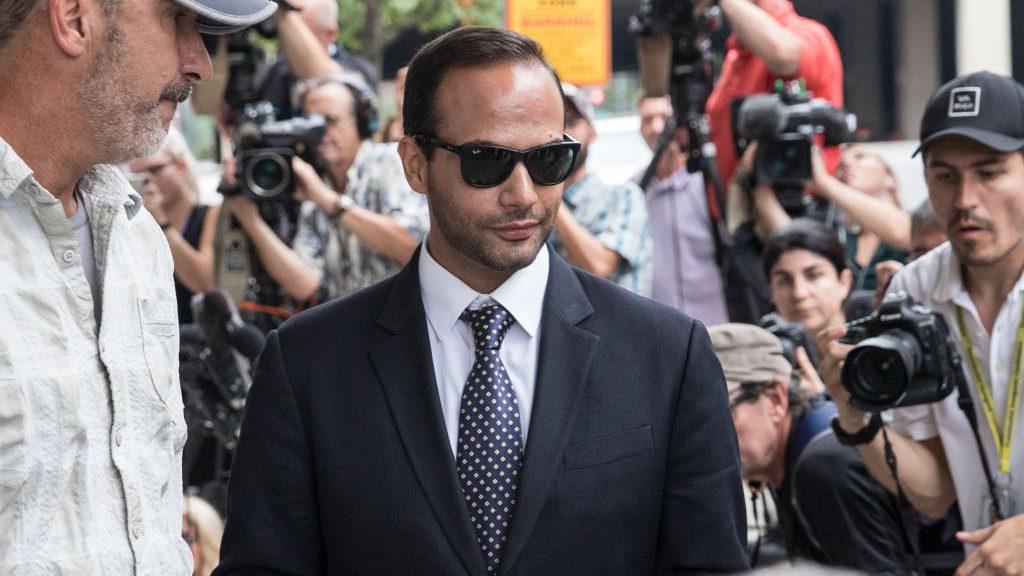 During the show, Toensing, an attorney who partners with her husband at the Washington DC law firm diGenova & Toensing, accused the FBI of trying to frame Papadopoulos with a suitcase full of cash in the summer of 2017.
According to Toensing, Papa-D was vacationing with his then-fiance, Simona Mangiante, in Greece when he was approached by someone who was supposedly impressed with his credentials, and said he wanted to do business with him. The individual allegedly talked the then-29-year-old into traveling to Israel to make a deal, and invited him to his hotel room.
“And there on the bed, is $10,000 in cash in a suitcase,” she continued. Papadopoulos took the money and gave it to his lawyer, who has it still.
Toensing said when Papadopoulos returned to the United States, he was greeted by FBI agents at Dulles Airport and they started searching through everything that he had “the second he landed.”
She added, “in fact, they already had his baggage from the plane. He couldn’t believe they had his baggage.”
“It was a set up!” exclaimed Gorka.
“It was a complete set up,” agreed Toensing.
DiGenova explained that the Feds already knew that he hadn’t declared that he had $10,000 and were expecting to find the undeclared cash so they could arrest him and “put the thumbscrews on and make him squeal,” as Gorka put it.
Worst of all, according to Toensing, “one of the FBI agents said to him, ‘this is what happens when you work for Donald Trump.'”
Papadopoulos tweeted that he would like to see Congress investigate the money. “They are marked bills. They remain with my lawyer in Athens,” he said.

I want congress to investigate this money. They are marked bills. They remain with my lawyer in Athens. Follow the money! https://t.co/TXKDUzxItj
— George Papadopoulos (@GeorgePapa19) May 9, 2019

Last August, the Daily Caller’s Chuck Ross interviewed the Israeli political strategist who set up the meeting between Papadopoulos and the Israeli oil consultant after he saw a court document filed by Special Counsel Robert Mueller referencing the $10,000 cash payment given to the former Trump adviser.


“The defendant provided information about $10,000 in cash he received from a foreign national whom he believed was likely an intelligence officer of a foreign country (other than Russia),” reads the court filing, which recommends a fine of between $500 and $9,500 for Papadopoulos.
“The defendant has stated that he kept that money in a safe pending his sentencing in this case and Counsel for the defendant has consented to the imposition of this fine amount,” it continued.

David Ha’ivri, the political strategist, told Ross that he introduced a man named Charles Tawil to Papadopoulos on his “own initiative” to work on a business deal “involving an oil and gas project in the Aegean and Mediterranean seas.”
Ha’ivri said that Tawil “is a part time consultant for companies that operate in Africa and Middle East” and that when he introduced Tawil to Papadopoulos, he was under the impression that the former Trump aide had “good connections” in the Eastern Mediterranean and Middle East.
Papadopoulos was arrested at Dulles International Airport on a return trip from overseas on July 27, 2017, according the the Daily Caller.
The acting director of the FBI from May 9, 2017 to August 2, 2017, was none other than Andrew McCabe, who was fired from the Bureau in March of 2018. The disgraced former Deputy FBI Director remains under investigation by federal prosecutors for leaking to the media and lying to investigators.
DiGenova and Toensing are convinced that Papadopoulos was the victim of a botched FBI sting operation and are disappointed that no one at the FBI blew the whistle on such nefarious activities.


“I hear all these people saying, ‘don’t blame the street agents,’ and that’s true generally, but here’s the truth,” he said.
“There were no whistleblowers in the FBI and the Department of Justice. Not a single agent, not a single career lawyer stood up and blew whistles on anybody.”

DiGenova noted that there were “agents in New York who knew stuff, who tried to complain to headquarters,” but because Main Justice was so corrupt, it went nowhere. “The truth is, there was no breakout of whisteblowers in the FBI. Even worse, he said, were the career prosecutors at the DOJ who knew what was going on, and said nothing.


“It is a disgrace that people who knew things didn’t say anything,” he lamented.
“There has to be accountability for all this and the only way to have that is by a gigantic investigation into how it all happened–which means grand juries, indictments, if necessary,” diGenova added.

The three agreed that Attorney General William Barr is doing a fantastic job so far, but they had nothing good to say about the current FBI Director Christopher Wray.


“He’s an empty suit. Not only that, he’s disingenuous,” diGenova complained, pointing out that Wray has never bothered to address FBI employees about the Bureau’s alleged malfeasance during the 2016 campaign. “The only thing that Chris Wray has ever cared about is his next job,” he declared.


Source: anonymous tip by ex girl friend I up to trouble overseas cause she mad I dumped her fat ***.  Secondary screen every us border cross.  Her punishment for lying? Nothing.  Agents find anything ever? Nope. Did they lie and try twisting stories to frame me for nonsence? Yip.  Any consequence for them lying to a USA citizen? Nope.


Speaking of the Clinton emails, what happened to Anthony Weiner's laptop?
Also, let's not forget Peter Smith, who was searching for the emails and ended up "committing suicide" in a hotel room in Minneapolis.  Sure Jan.
---------

Another entrapment scheme by the corrupt pro-Clinton FBI exposed.  They tried Mifsud, they tried a honeypot on Papa-D and it all failed because patriots are a lot smarter than traitors (that's why they choose to be patriots in the first place).  He gave the bribe to his lawyer and the FBI got nothing at the airport-just so funny!  And 10K$, that's chickenfeed you idiots, but just enough to get you in trouble for not reporting it if you are stupid enough to bring it into the country.  But Papa-D, like Trump, is very smart.  What complete fools these Demonrats be.
Spygate is a scheme run by idiots and morons.  In other words-Hilliary, Bernie, Biden and Obuttboy supporters.  The entire Demonrat base consists of the dead and the brain dead!  And that Roger Stone and Flynn entrapment/arrests the traitor Mueller pulled deserves drawing and quartering on live pay-per-view.
Dan Bongino show which exposed this huge spygate coup attempt by the deep state at least a year ago. As he put it, this isn't James Bond, it's Bond, James.  If you enjoy making fun of our leftard traitor enemies (as Mr. Burns would put it its like taking candy from a baby) listen to Dan expose their moronic understanding of elementary economics or even arithmetic.   Dan's the man.  I thank the commenter on this site who recommended him.  Let's make Dan's show bigger than CNN and MSNBC combined (admittedly a low target as both are nearly bankrupt).  He deserves it.  I even like his commercials all for products he uses himself.  And as you might expect, Dan is a huge 2d amendment advocate-my litmus test for whether I like a pundit.

Posted by Juicing and Raw Foods Sunboy at 2:43 PM
Email ThisBlogThis!Share to TwitterShare to FacebookShare to Pinterest
Labels: FBI set up and framed Trump advisor in 2017, this is what happens when you work for Donald Trump
Newer Posts Older Posts Home
Subscribe to: Posts (Atom)