SHROUD A NEW ASTONISHING PHENOMENON DISCOVERED IN THIS FIND

Posted by Juicing and Raw Foods Sunboy at 8:32 AM

Posted by Juicing and Raw Foods Sunboy at 7:46 AM

Posted by Juicing and Raw Foods Sunboy at 1:45 PM

Posted by Juicing and Raw Foods Sunboy at 11:50 AM

Email ThisBlogThis!Share to TwitterShare to FacebookShare to Pinterest
Labels: shroud of Turin

The ONE TRUTH you NEED to know

Posted by Juicing and Raw Foods Sunboy at 5:01 AM

Angels are closer than you think

Posted by Juicing and Raw Foods Sunboy at 6:52 AM

Email ThisBlogThis!Share to TwitterShare to FacebookShare to Pinterest
Labels: Angels

ENOCH TELLS.- OF WAR IN ANTARCTICA - THE TRIGGER.

Posted by Juicing and Raw Foods Sunboy at 3:58 AM

Email ThisBlogThis!Share to TwitterShare to FacebookShare to Pinterest
Labels: ENOCH TELLS.- OF WAR IN ANTARCTICA

Posted by Juicing and Raw Foods Sunboy at 11:11 PM

Email ThisBlogThis!Share to TwitterShare to FacebookShare to Pinterest
Labels: STRANGE BIRTH OF NOAH.

Lot's wife by the Dead Sea

This photo of Jordan Select Tours is courtesy of TripAdvisor

Posted by Juicing and Raw Foods Sunboy at 10:17 PM

Email ThisBlogThis!Share to TwitterShare to FacebookShare to Pinterest
Labels: Lot's wife by the Dead Sea 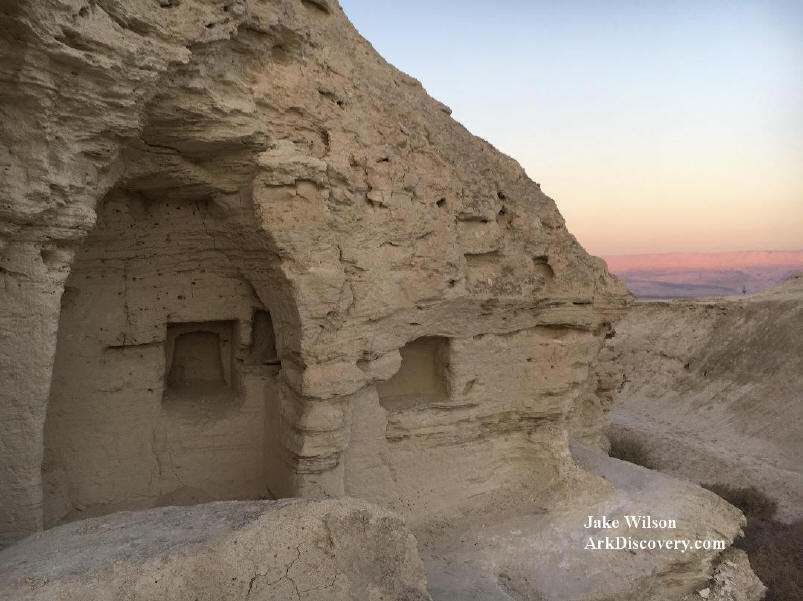 Above:  Arched opening with square inserts indicate man-made construction of these formerly limestone buildings that have been reduced to ashen remains.      Photo Jake Wilson Above:  Looking out from the interior of the remains, we can see an arched opening.  Photo Jake Wilson 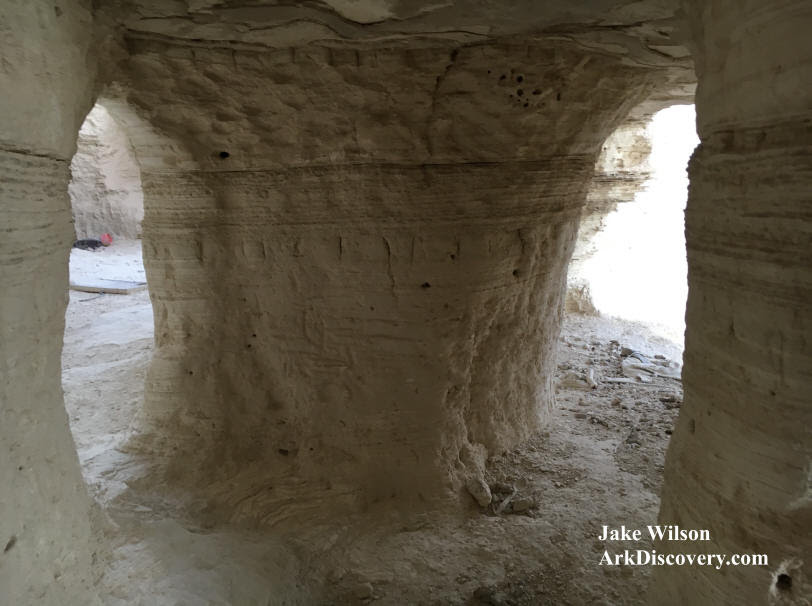 The five cities of the plain have been located and the evidence is staggering.  For the first time in modern history we have found round balls of brimstone, or nearly pure sulfur, embedded in an ashen area near the Dead Sea, which show clear signs of having once been ancient building structures! 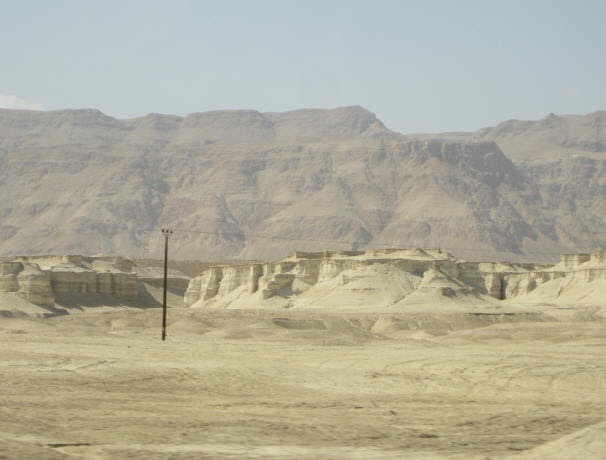 Above:  Lighter colored formations can be seen near the Dead Sea. 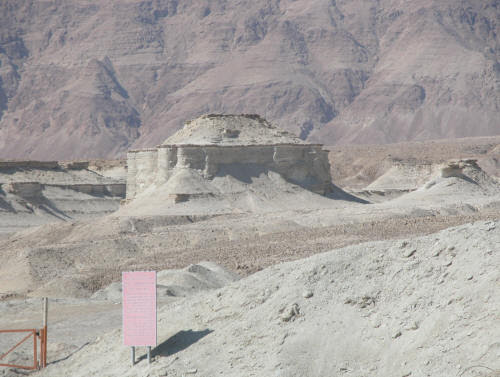 Above:  ziggurat stands amidst ashen ruins in Gomorrah, with darker terrain in rear.
Government sign with gate, attempting to keep vehicles out.
Josephus Saw the Cities -- Why Can't We?
The cities were located in the plain, so they should not be located in the low area now covered by the Dead Sea.  These cities were well known in the first century, as Josephus said, "The traces or shadows of the five cities are still to be seen."  If Josephus could see them, then we should be able to see them also.  The water level of the Dead Sea has fallen since the time of Josephus, so the areas Josephus saw in his day are still visible today.
Biblical Warning For All
The cities of the plain were destroyed as a warning for all that this same event will happen again one day to the wicked.  One would think God is capable of preserving this ancient lesson for us to see and to learn from.
"Then the Lord rained brimstone and fire on Sodom and Gomorrah, from the Lord out of the heavens"  Genesis 19:24.  "Turning the cities of Sodom and Gomorrah into ashes, condemned them to destruction, making them an example to those who afterward would live ungodly"  II Peter 2:6.  (The word for "example" means an exhibit for warning.)
Analysis of the Brimstone
These sulfur balls are mostly golf ball sized, and some have burn marks all around them!  Webster's Dictionary says that "brimstone" = sulfur.  Accordingly, we have found the absolute proof that we have finally located Sodom and Gomorrah, the cities of the plain! 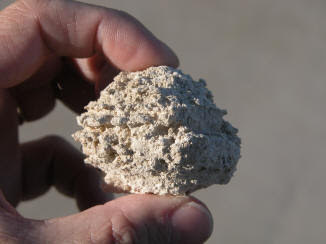 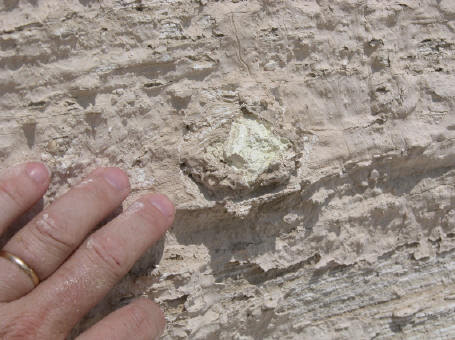 Above:  Located on the side of a ziggurat, this brimstone in a shell is opened to reveal the unburned sulfur inside
Each of the cities of the plain contain evidence of brimstone which God rained down upon the cities to destroy them.  The brimstone is composed of 96-98 percent sulfur, with trace amounts of magnesium which create an extremely high temperature burn.  This is the only place on earth where you can find 96 percent pure monoclinic sulfur in a round ball.  This brimstone is NOT from any type of geo-thermal activity as there is no evidence of such in the area, and geo-thermal sulfur nodules are only 40 percent pure sulfur and are of the rhombic type. 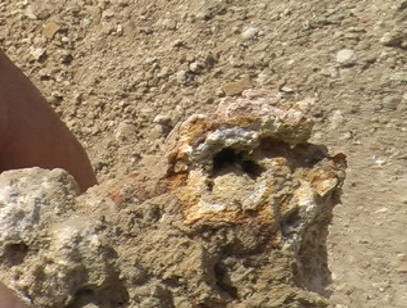 Above:  holding a chunk of ash that has a burned ring which surrounds an unburned ball of sulfur 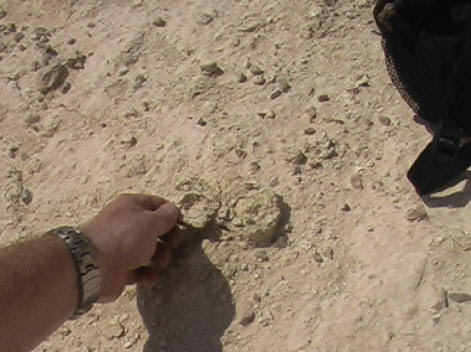 Above:  removing the lid from a brimstone shell reveals a round ball of sulfur inside

Above:  Brimstone with burn ring

Analysis of the Ash
God rained down upon these cities was so hot that it burned the limestone blocks that were used in the construction of the cities.  The ash there today is composed of Calcium Sulfate and Calcium Carbonate which are by-products of the limestone and sulfur burning.
Everything in these cities burned and turned into ash, including the buildings themselves as the Bible says that the cities were to be destroyed also.  The Bible told us that God rained down "fire and brimstone"  When God rains down fire, it is a consuming fire, just like the time of Elijah when God sent down fire to destroy the stone altar, the limestone buildings here were totally destroyed and turned into ash. 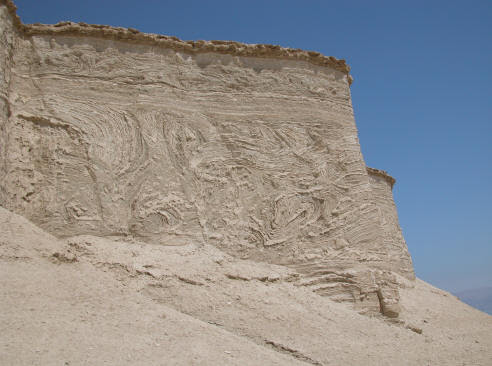 Above:  The extremely high burning temperatures created a multi-shaded layering of ash that was formed by thermal ionization, caused by electrons repelling and attracting, creating a swirling effect in the remains. 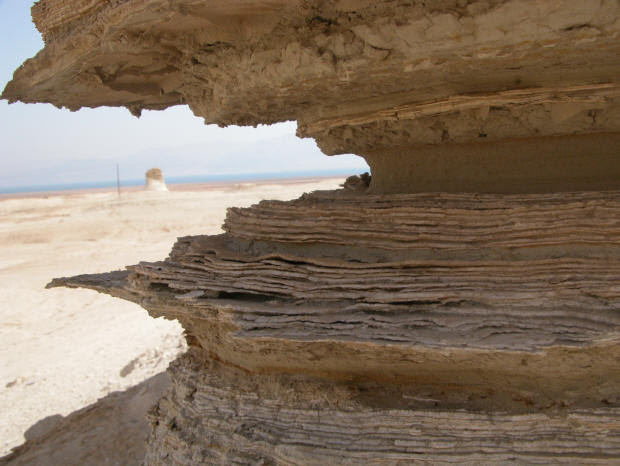 Above:  layers of multi-shaded ash, crumble in your hand.  Dead Sea and sphinx in rear
Cities Visible in Satellite Photos
The cities are almost entirely turned into white ash, and can be seen in the satellite photographs below.

Notice each of the cities stand out from the surrounding terrain because of the white ash contained within them.  The city of Zoar was a "little one" or a newly built city that was square.  As cities grew or expanded they quickly lost this square shape.
Genesis 10:19 indicates the five cities formed the Canaanite border, thus the could not have been grouped together at the south end of the Dead Sea as popularly believed.  They form a north-south line along the Jordan/Dead Sea area.  Gomorrah is located at the base of Masada, and in 1998, additional formations were found in Jordan on the opposite of the Dead Sea from Gomorrah in the Lisan Peninsula, including a large cemetery area containing 1,000,000 graves.  The same structures as found on the Israeli side were also found on the Jordanian side -  ash, brimstone and even ceramic tile.

Above -  looking southwest at the southern end of the Dead Sea 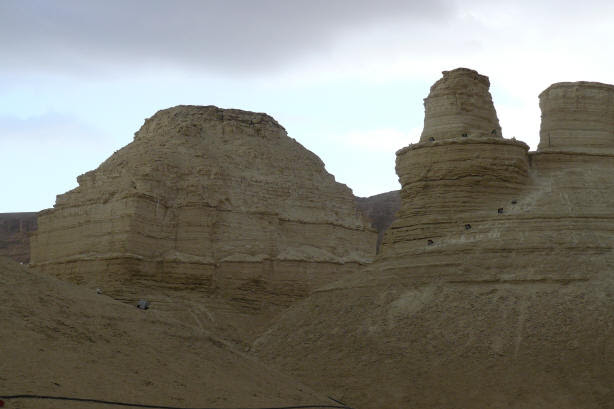 Above:  On the left is a ziggurat and on the right a tower 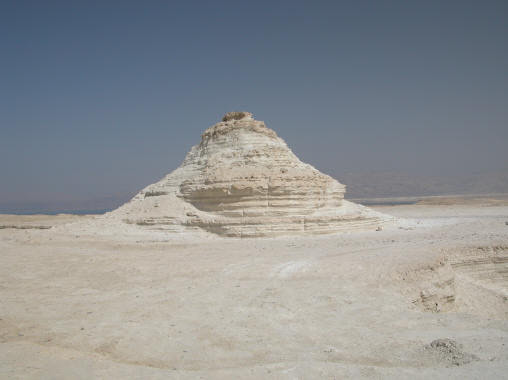 Above:  ziggurat shape on raised platform composed of white material 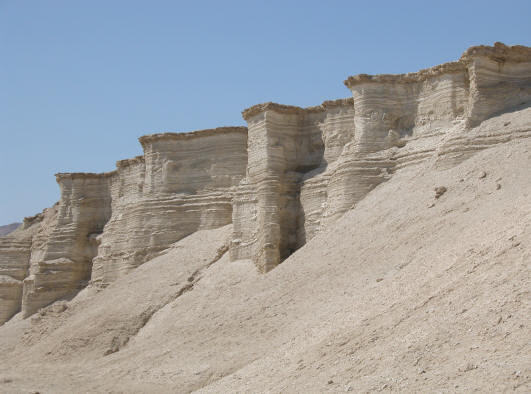 Above:  Ninety degree angles extending out from a wall demonstrating unnatural architecture 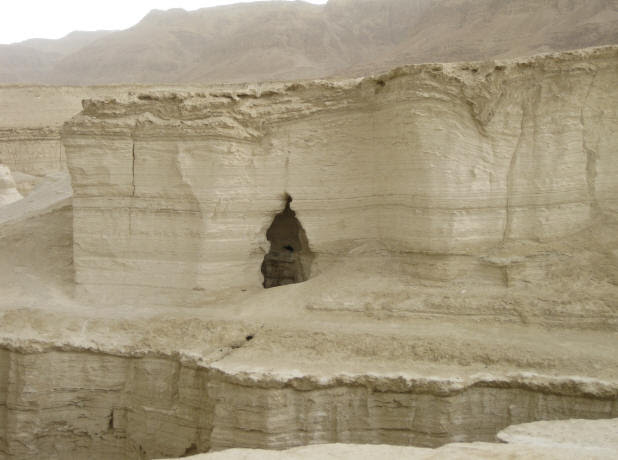 Sphinx Shapes
Unique shapes are visible in the cities that are not found in nature, including sphinx shapes like the ones below. 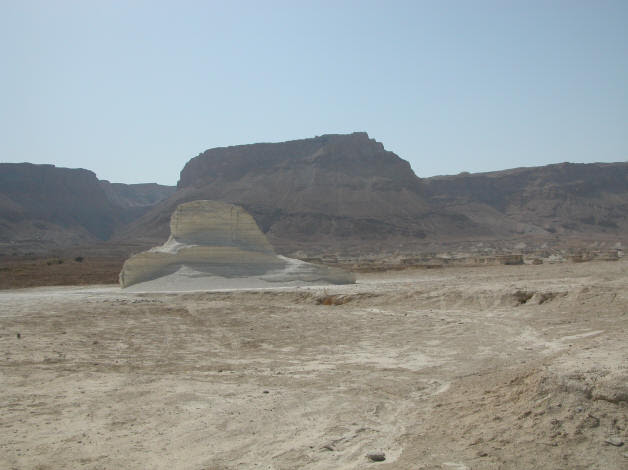 Above: This sphinx formation on a raised platform is about 40 feet long and was made of a different whiter material than the surrounding platform. It may have been a worship figure or god and was made of a special material.   Masada in rear. 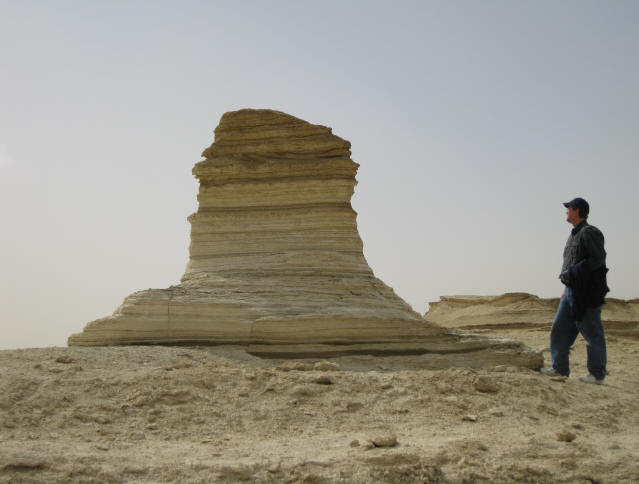 Above:  Another sphinx shape sits at the edge of the city.  They thought it would protect them, but it too
was consumed in the destruction of fire and brimstone.
Sulphur Crystals
The extreme heat caused unusual specimens that can be found in the cities, including the creation of sulfur crystals.  Below are photos of a large slab of crystals found by our Ark Discovery Team. 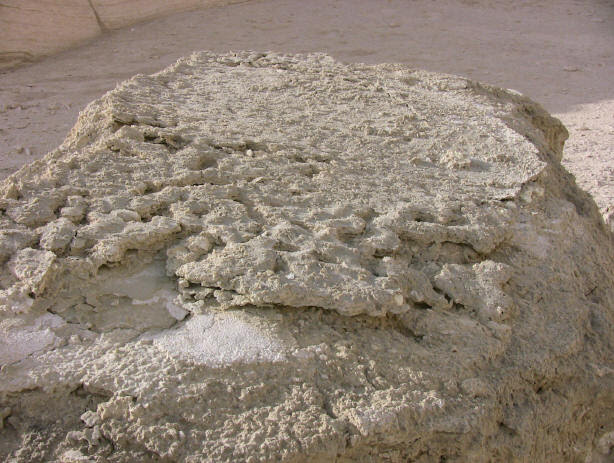 Above:  The top layer is a solid slab of sulfur crystals created by a complete layer of
brimstone underneath that was burning, then turned to a liquid, then cooled down
leaving this layer of crystals.  Approximately six feet long. 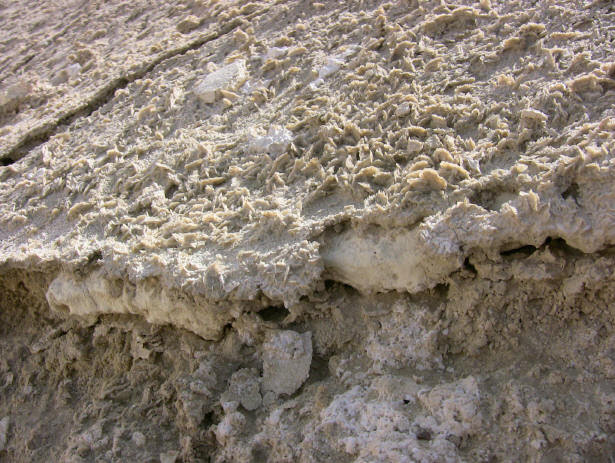 Above:  Here we can see the brimstone underneath the crystals that are on top. 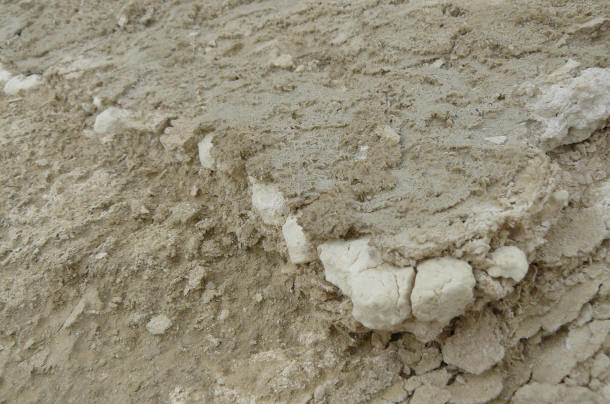 Above:  another shot of the brimstone underneath and the crystals on top 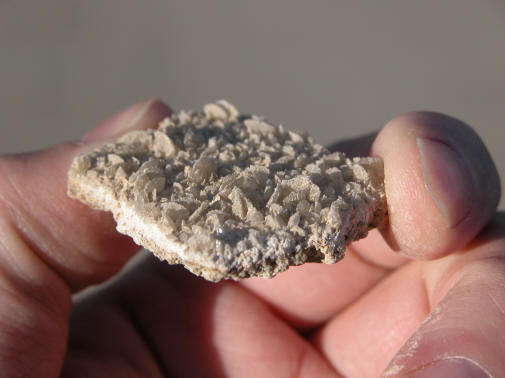 Above:  In another area, we found sulfur crystals which are a remnant of the consumed brimstone. 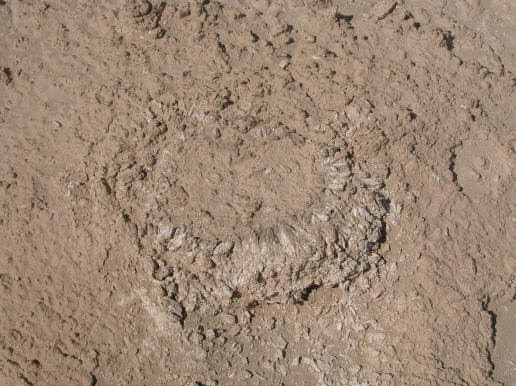 Above:  two feet in diameter clump of crystals.  Another group was found later when I
broke open a large clump "live" on video. 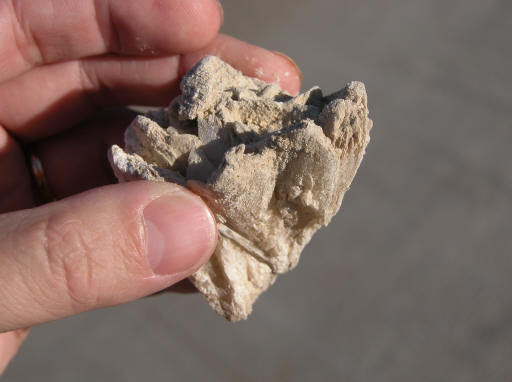 Above:  more crystals resulting from the sulphur burning, turning to liquid, and cooling into crystals
Anomalies
More evidence of the extreme heat was found. 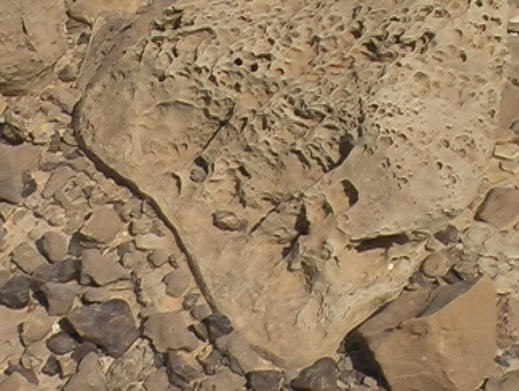 Above:  this specimen shows signs of having been melted, with the upper portion
bubbling and the lower section pooled into a solid. 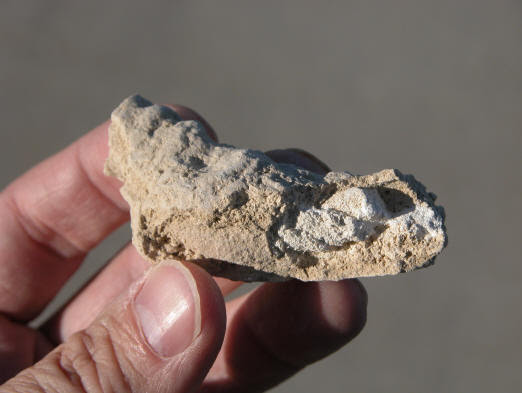 Above:   Specimen that some people think resembles bone, with the marrow in the middle. This looks similar to the specimens found by Dr. Lennart Moller, author of The Exodus Case

A spear head and a cache of burned gold which is now gold salts, burned bones, jars, and tile have also been found by others who have visited the cities. The bones reveal that the inhabitants were 12 to 16 feet tall.
Most photos by Kevin Fisher.
Posted by Juicing and Raw Foods Sunboy at 12:46 PM

Email ThisBlogThis!Share to TwitterShare to FacebookShare to Pinterest
Labels: Sodom and Gomorrah

Posted by Juicing and Raw Foods Sunboy at 1:57 AM