Celebrity Monsters among us

HE: He’s a Scientologist. He is gay and deep in the closet.

SHE: His handler; the women have the controls in satanism. Clearly in Control. Demonic reveal of the witch tongue (as they do), sanpaku killer/predator eyes; cruelty.

BOTH: Both droid children are gay. The big deal among the Hollywood damned, is phreak/gay children. Big coven points. In our time, you have to be total phreak or you are NOTHING among the covens. It's why you see so many alleged normal folks in their 40s through elderly, coming out gay: they don't want to be left out in the dark plunge into the abyss club. 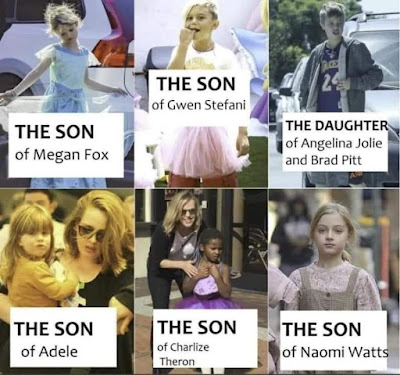 OK:
1. Janet Hubert (original Bel Air Aunt Vivian) accused Will of molesting her son, who was underage at the time. There is at least one song out ~20 years ago obliquely referring to this.
2. Will is a homosexual.
3. Will and Jada are kabbalists, Jada is the higher ranking one due to being Sephardi.
4. The slap and its timing (early spring) reeks of the latter day versions of the Babylonian Akitu ritual.

Monsters move among us, pretending to be our betters. Is that what you all believe, that celebrities are our betters, when everything about them is so openly evil and demonic that the stench of their crimes reaches high into the heavens?

Scientology...isn't the world tired of all that demonic L Ron Hubbard trash occultism yet?

Posted by Juicing and Raw Foods Sunboy at 6:28 AM
Email ThisBlogThis!Share to TwitterShare to FacebookShare to Pinterest
Labels: Celebrity Monsters among us
Newer Post Older Post Home