Here is Stacey Campbell doing her crazy making blatherings about the "future." All the big mainstream (network satanists, giving over false doctrine and blaspheming Yeshua and YHVH) are pushing this woman as a prophet sent from God.

So, I caught this from a video of her and present what was visible for a single frame of footage.

But first, the Holy Word says that NO WOMEN are to be Preachers nor are any of woman to be or ever were PROPHETS. It's just the way it is. Women have a role in the Church, yes. But not as Preachers, Priests, or Ministers.

And never was there an instance in the true history of the world that Our Heavenly Father used a woman's body for his message and guidance via the prophet system He established.

So, at the outset, she's a fraud. A fake. She is a false prophet and is, as it happens, quite evil. See the following 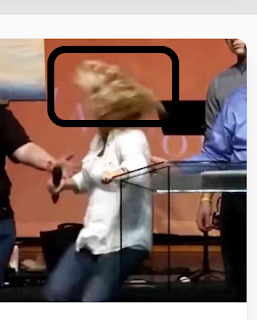 As can be seen, her controlling demon makes an appearance while she is onstage doing her thing. Misleading, lying, and blaspheming the Most High Yahua with her phony messages from On High. It's the face of the damned. She speaks evil blasphemies. And the churches that push her on the world stage big time, completely compromised and satanic.

Posted by Juicing and Raw Foods Sunboy at 8:24 PM