The World Government Flag of Nimrod

The World Government Flag of Nimrod

Many, many years ago, in prayer, I asked our Heavenly Father what would be the flag of the government of the Beast, Nimrod? That night, while sleeping, I was shown a line of men with bright, flaming torches on a ridge over looking a valley, I do not know where. It felt like Israel, somewhere.

Looking closer, in the midst of this group of obviously soldiers in full modern equipage, I saw an enormous battle flag, representing them.

(I do not possess any graphic editing software. When they forced me into Windows 10, nothing of value in that area came with it. My old software, which was just Win Paint, wouldn't work on Win10.)

It was a battle standard, like the Germans and Romans used. With 2 Phoenixes on top, facing outward. Gold headpiece, with the flag next to it below, stretched between two horizontal poles. It was just a bunch of straight, colored dark lines, in the vertical position, up and down, not side to side. Like 70 or so of them, very thin. And very dark colors too, I noticed.

I was surprised. This was before the era of gay pride flags and the like. It made no sense to me at the time and I just assumed each line represented a country. Nowadays, it makes perfect sense. This is the Beast's flag in which he will rule the world. For a short time. 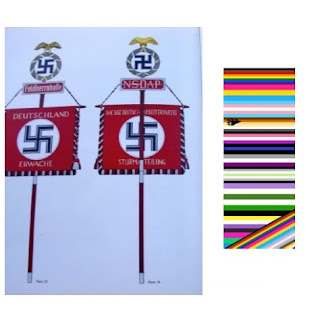 Posted by Juicing and Raw Foods Sunboy at 11:47 AM