The Brand New, communist approved and rewritten Bible...accepted for use by covens everywhere

And is starting to be promoted in the west. No surprise.

Here is an example of the changes. It's pure page after page of endless blasphemy.

In the original story, people gather to stone the adulteress according to the Law of Moses. Jesus intervenes and says "Let the one who has never sinned throw the first stone.” The accusers leave, one by one.

But then, according to the textbook, “When the crowd disappeared, Jesus stoned the sinner to death saying, ‘I too am a sinner. But if the law could only be executed by men without blemish, the law would be dead’.”

Oh...in case you didn't know, this is how modern communist China came into being... 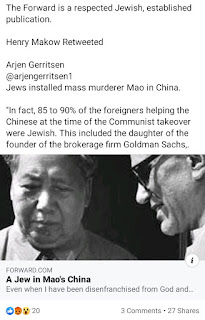 Posted by Juicing and Raw Foods Sunboy at 7:13 AM