"Death Valley National Park on Friday, as the park received over 14 times their normal August rainfall in a single day."

Longer than that, be assured. This will go on for the rest of the month, mostly. It will just go on and on, until its decided enough. That won't be for some time. All those prayers for rain for the last several years are being answered en masse. A real blessing for the southwest and slapping globohomo in their nasty satanic face, quite appropriate. Tell me again how there is no water in Lake Meade; because of a certain, it is going UP several feet a day, though you will not hear that on the news.

Every time you go to drain the lakes, the rains will come to stop you. This means you Cali. This means you. Your next, and not just east of the Sierras.

You get something extra.

34Now the rest of the acts of Jehu, and all that he did, and all his might, are they not written in the book of the chronicles of the kings of Israel?

The acts of Jehu were amazing. He single handed removed all the satanic altars, groves, and temples of BAAL and Asteroth in Israel; a great king. The first one in a long time, especially after Ahab, Ahaziah, and all the other satan worshipers. He finished what Elijah started, happily.

Rounds of heavy rain and thunderstorms have brought intense flooding to portions of the Southwest in recent days and weeks due to the North American monsoon in full gear across the region. Many cities in the area have received significantly more rainfall than normal for the month of July and AccuWeather forecasters say that the pattern isn't set to break anytime soon as another surge of moisture is expected to push into the region to start the upcoming week.

The Southwest has been no stranger to heavy rain recently. In Las Vegas, streets seemingly turned into rivers with several casinos experiencing water leaks as Sin City has almost recorded twice the amount of rain than was observed in July. Major flooding also occurred across much of Arizona, leading to a large number of water rescues in the state.

Even in the past few days, the recent bout of rainfall has led to flooding issues and other hazardous conditions. Roughly 1,000 people were trapped in Death Valley National Park on Friday, as the park received over 14 times their normal August rainfall in a single day, causing the exit roads to become washed out. Along the Southern California coast, which is often spared from monsoon-related rainfall due to a persistent stream of Pacific moisture, rain was reported in some places for the first time in months. In Irvine, California, located approximately 35 miles southeast of Los Angeles, rain fell for several hours according to observed weather data in the region. 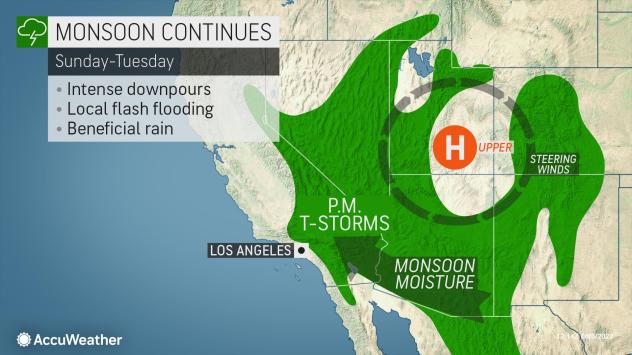 After what may be a short break from the rain in some areas, a surge of humid air associated with the North American monsoon is set to arrive by Monday, increasing the chances for rain and localized flooding once again.

"With a bit less moisture to work with on Saturday and the first half of Sunday, any rain chances will be reduced. While isolated spots may still see storms, there will be more distance between them," AccuWeather Meteorologist Brandon Buckingham said. "But by Monday, that moisture is likely to have increased, and more widespread rainfall will be in the cards once again."

As this moisture surges northward and spawns showers and thunderstorms, those spending lengthy amounts of time outside or camping should remain on alert for rapidly changing conditions, including rapidly rising river levels. Even if heavy rain is not falling nearby, runoff from a thunderstorm can cause water levels to rise almost instantly, even miles away.

GET THE FREE ACCUWEATHER APP

While many cities such as Phoenix and Albuquerque, New Mexico, are known for their hot and dry weather, next week's increase in humidity will make these desert cities feel more like Florida at times. The humidity can also make it feel deceptively warmer compared to the actual air temperature, therefore meteorologists recommend to those participating in outdoor strenuous activities should try to do so during the cooler morning or evening hours.

The rain will also be beneficial for most of the Southwest as almost all of the region is in some stage of drought. Eighty-two percent of Utah and 60 percent of California are considered to be in either extreme or exceptional drought, according to the U.S. Drought Monitor. Even in Arizona, which has had some of the region's heaviest and most consistent rainfall, over 90 percent of the state still remains in some form of drought, proving that it will take a prolonged period of wet weather to break the drought conditions. 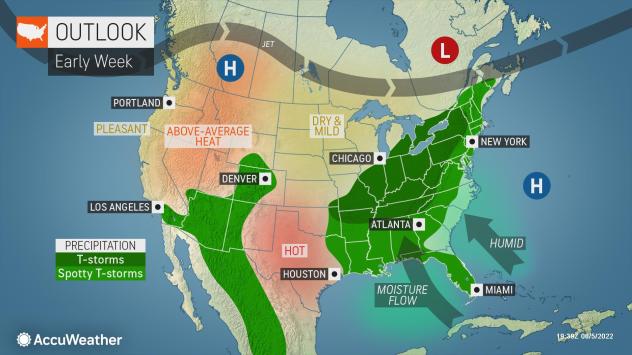 Forecasters expect the heaviest rainfall should stay inland from the California coast, but some rain in cities such as Los Angeles and San Diego cannot be ruled out.

"The coastal mountain ranges and cool air from the Pacific Ocean often work together to keep rain chances low along the Southern California coast. But this week, enough tropical moisture may be present to allow some rain to sneak a bit farther westward," Buckingham explained.

Posted by Juicing and Raw Foods Sunboy at 11:43 AM
Email ThisBlogThis!Share to TwitterShare to FacebookShare to Pinterest
Labels: 2 Kings 10-34, 8-6-22, av 8, Monsoon rainfall set to continue next week in the Southwest
Newer Post Older Post Home